We are sorry. Lunch menu is available only in Czech.

You can look our daily menu at the bottom. 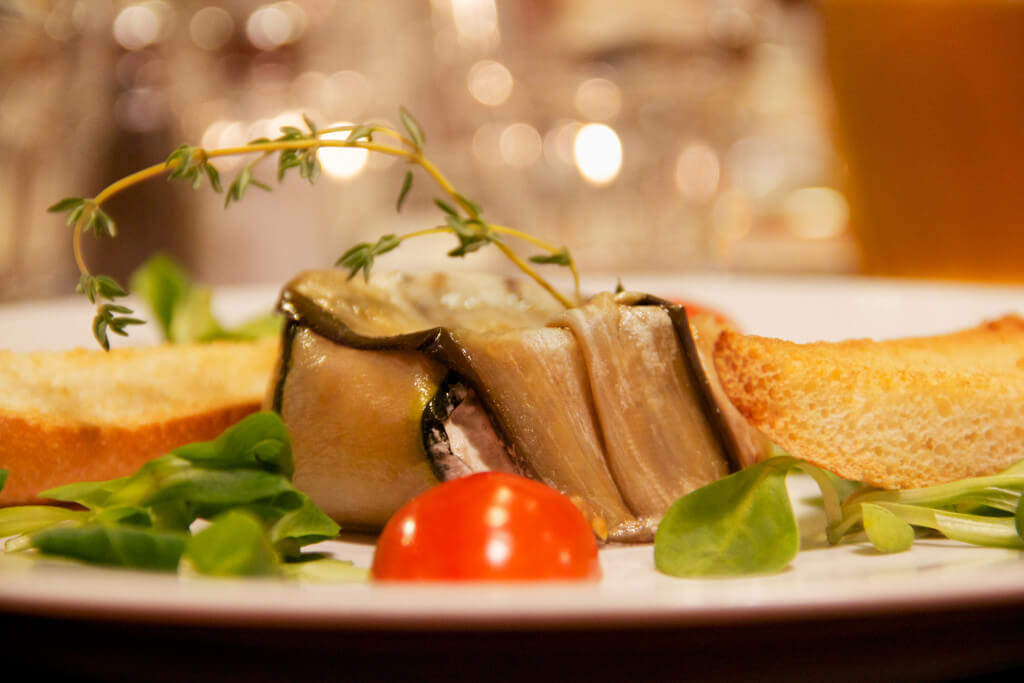 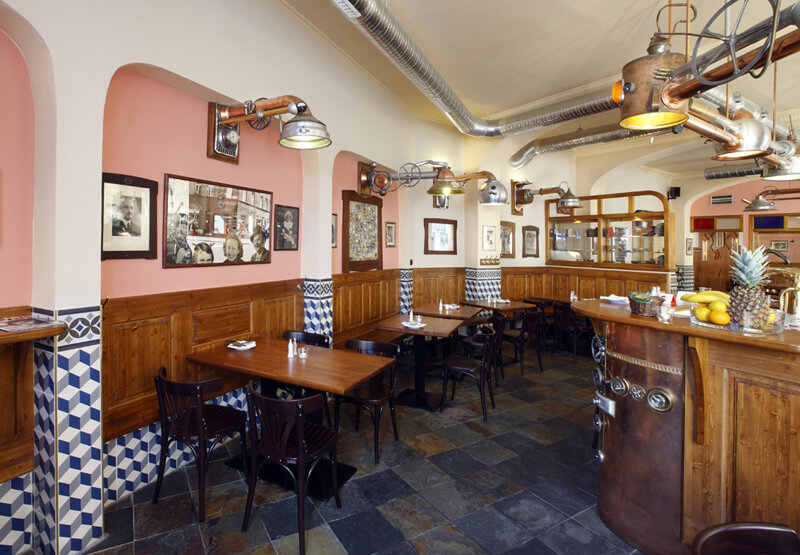 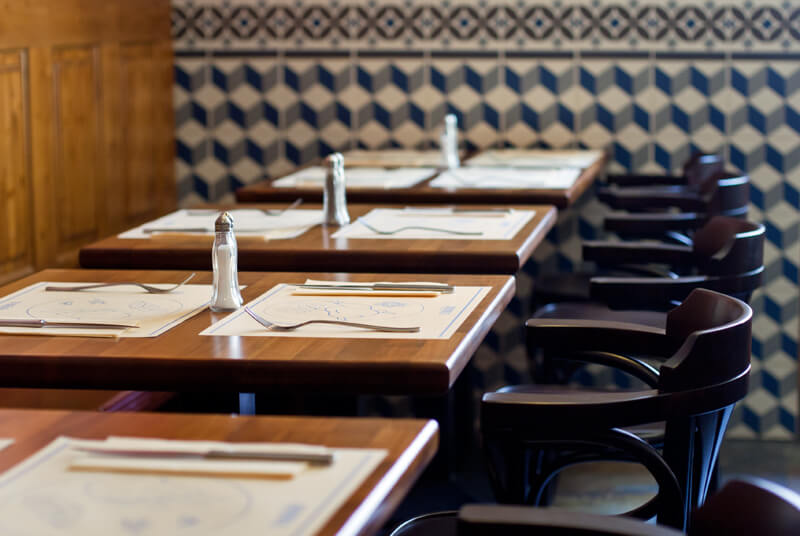 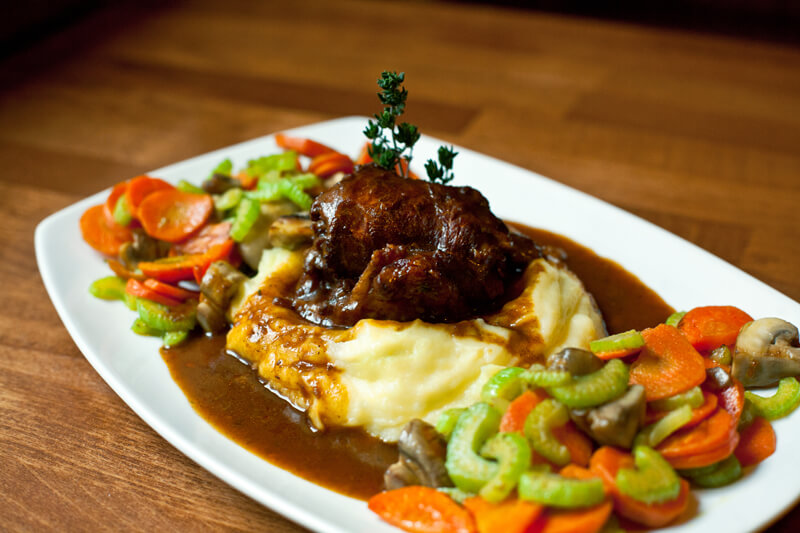 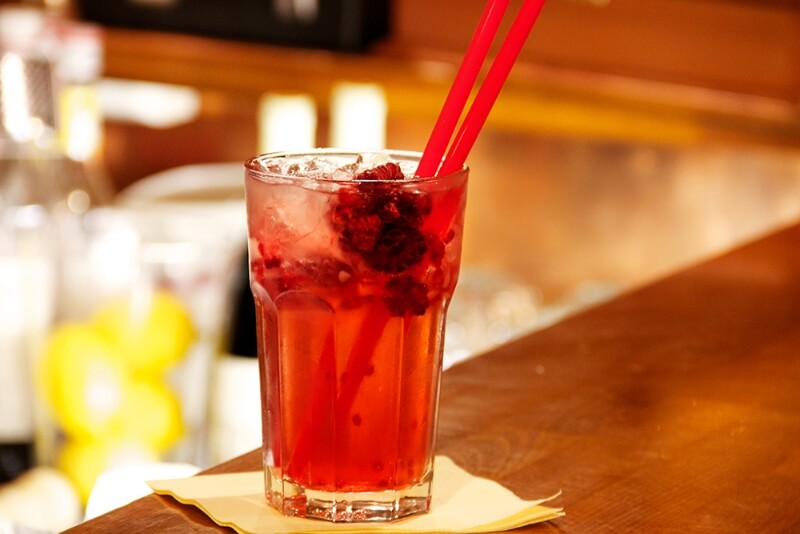 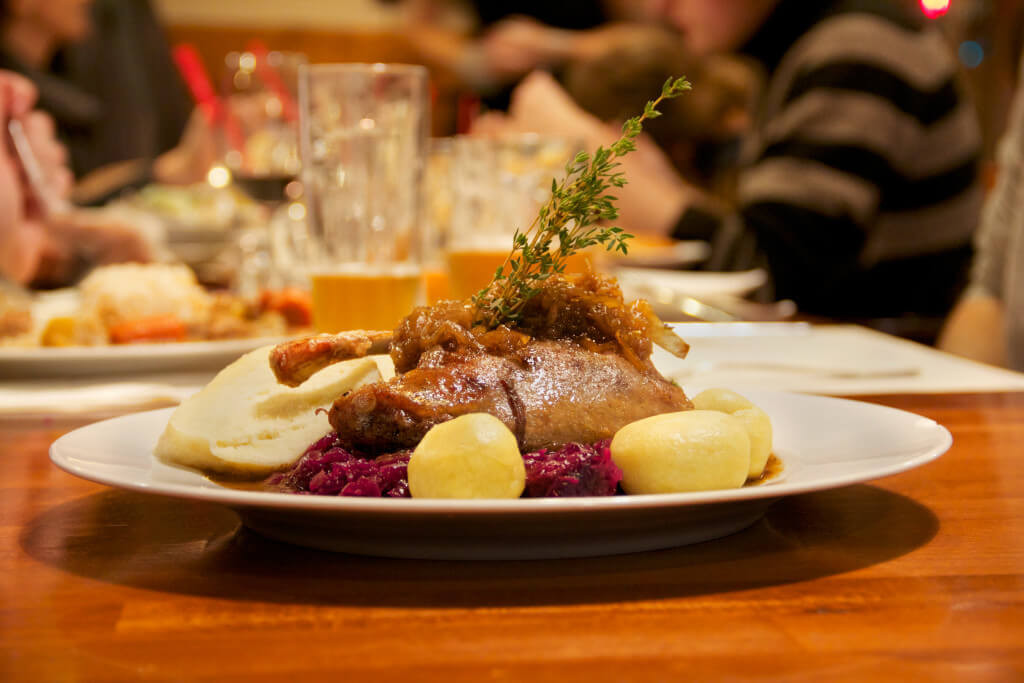 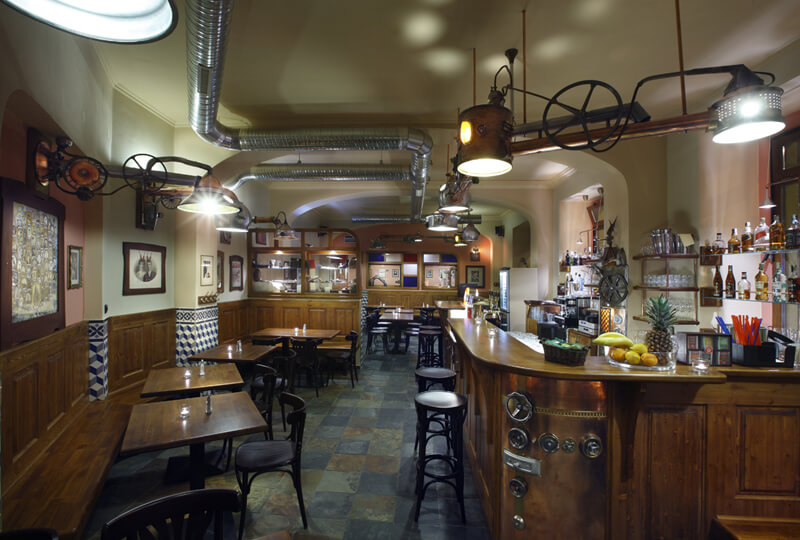 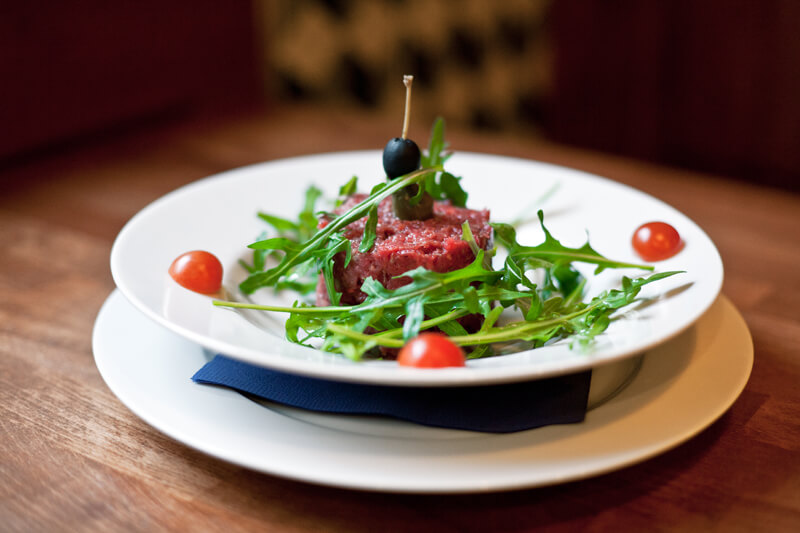 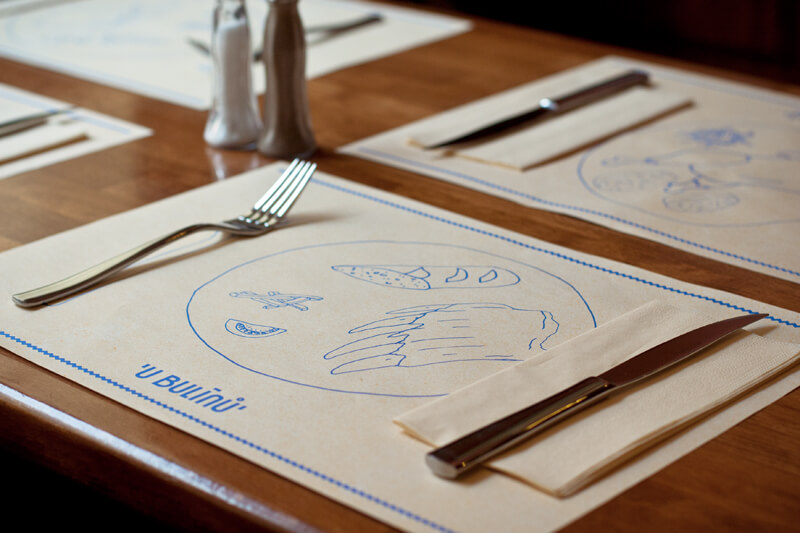 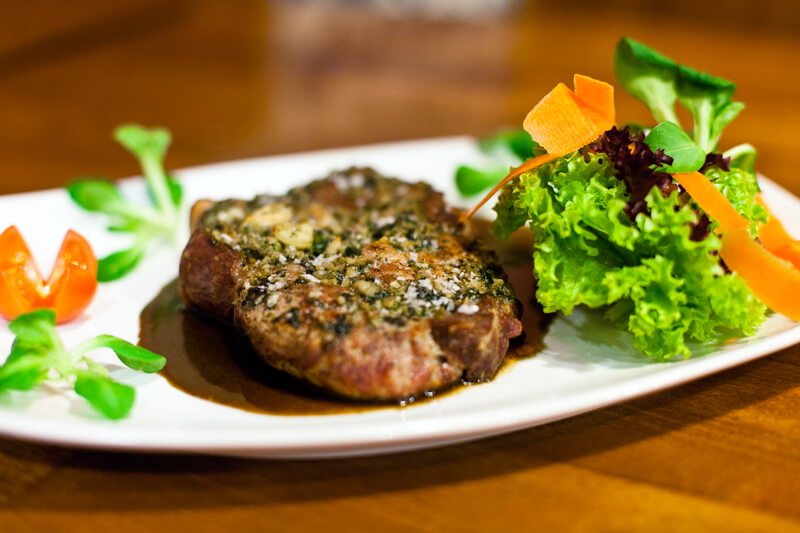 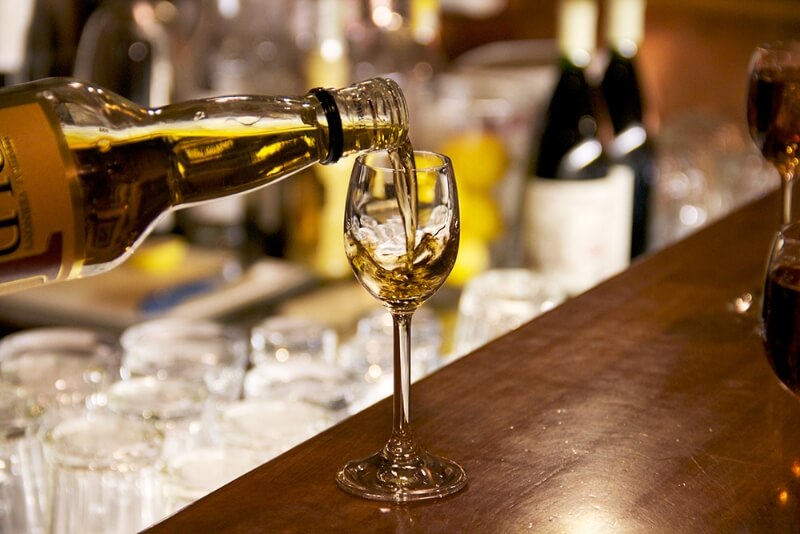 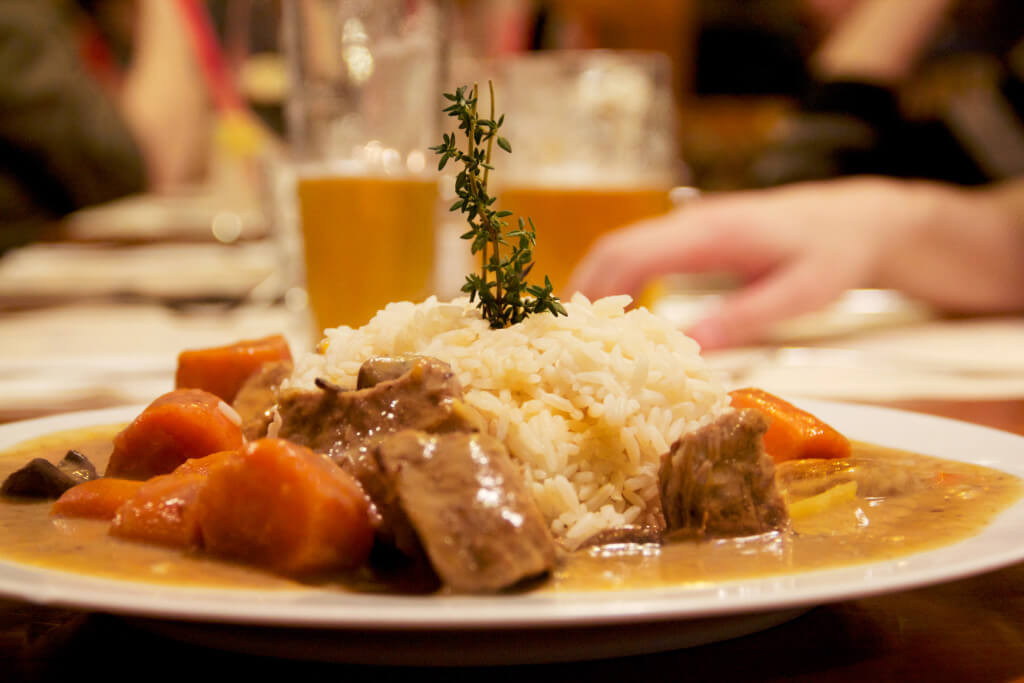 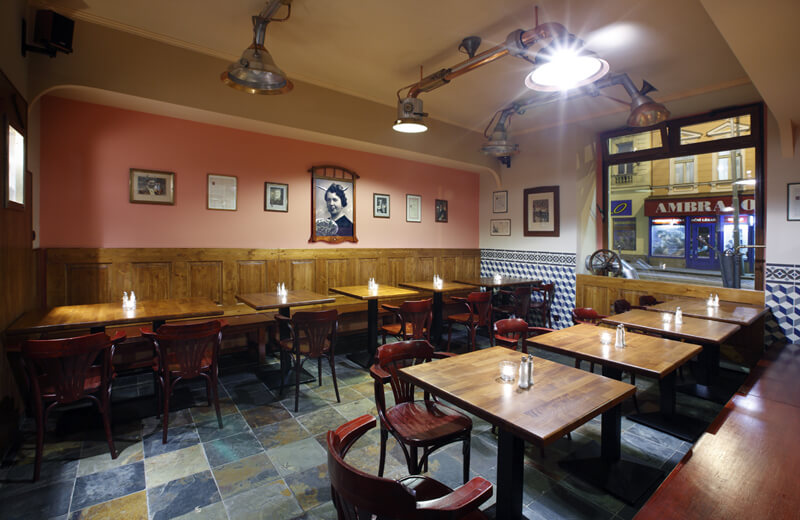 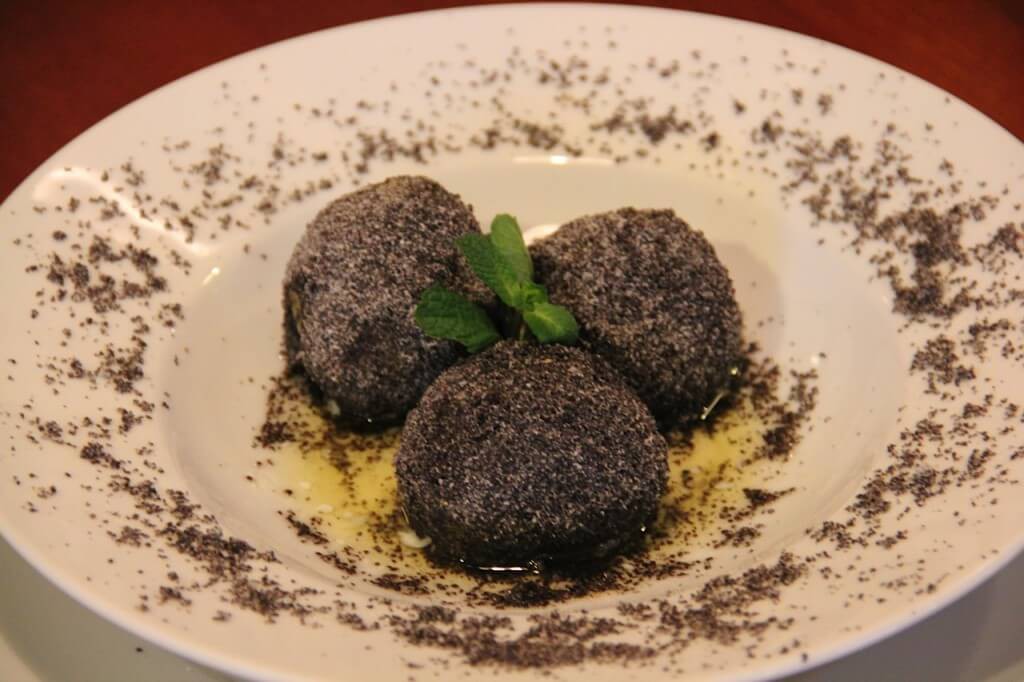 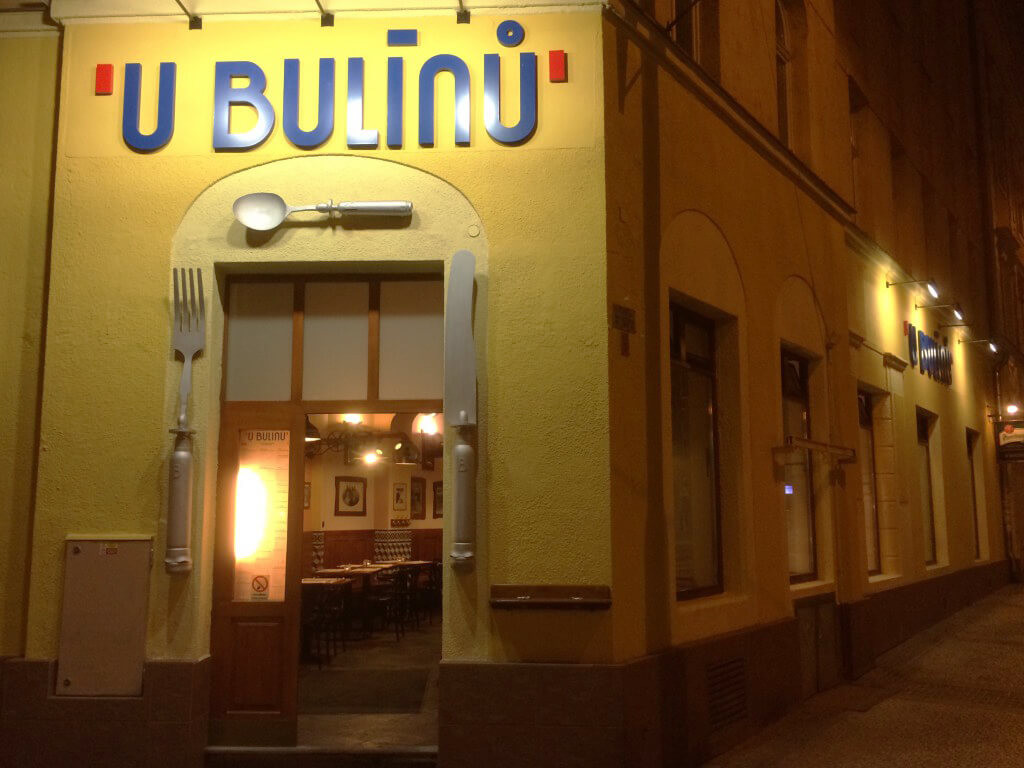 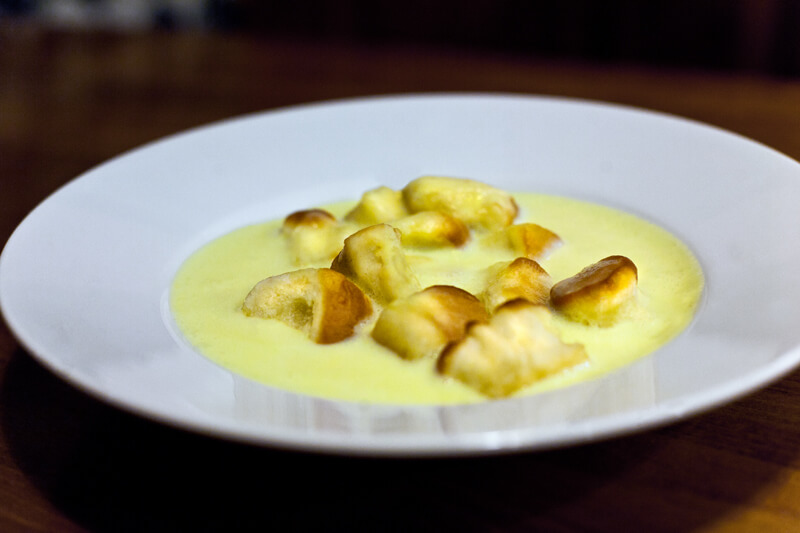 HOW TO GET THERE? 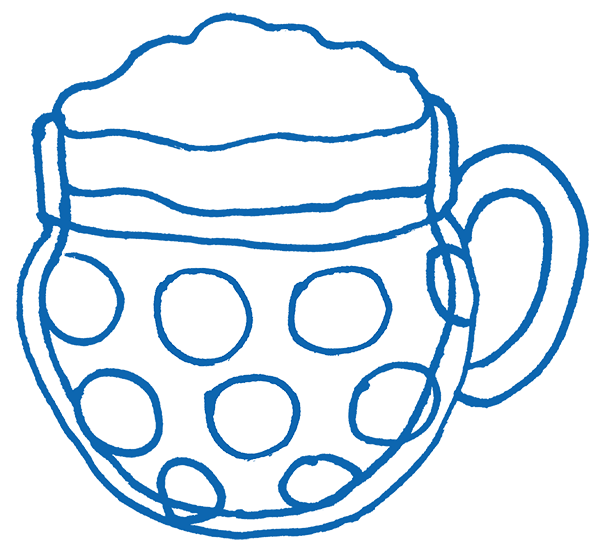 Dear Friends,
The family of the current owners took over the restaurant from the former tenants in 1998. As is often the case when starting something new, they wanted to make some minor alterations to the otherwise fully functioning restaurant. After pulling up the lino floors in the neglected lounge, they came across tiles from the First Republic. To their surprise, underneath the tiles they discovered a whole range of items which looked like rubbish.

With the diligence of an archeologist, the gradually unravelled items which had been wrapped in greasy paper – cutlery tied in a bundle, a decaying barometer from some kind of antique device, an animal’s horn in a wooden box and a mysterious cast-iron pan with the lid firmly attached with copper wiring. In great anticipation, they lifted up the lid.
A lump of real sirloin beef larded on the edges turned a reddish tint from the colour of the lard covered with a thick creamy sauce, a large slice of yellow lemon with cream and cranberries and over real bread dumplings a little cloud of steam. The food was fresh! In turn everyone tried some until the last drop had been wiped up.

It was with a sense of gratification that they contin- ued their research now – items such as antique kitchenware,
a prayer book, an elegant ladies shoe and other common every- day items. At the end they opened up a tin box filled with a vast array of photos and written documentation and, above all,
a diary written in the handwriting of none other than Anežka Tuzarova “Vincenc Bulin, for God’s sake, give him a a rest, he was a decent man, a grocer. He bought only the best goods, always fresh from the best sources. He let people pay for things on the drip which people liked him for. In poverty he lived like everyone else. He married a girl much taller than him, Miluse Drobkova who was nicknamed Drobek (little crumb) and who constantly criticised him. Vincenc worked right till the end and duringthis tough time, was never one to quit smiling.
At this point in his life, a dandy of some sort called Ignac Kuchara started frequenting his shop. Vincenc was sympa- thetic to the careworn man’s troubles and became popular with him.

One day after a big rainstorm, water got into Bulin’s storeroom and ruined all of his stock. Kuchara was there right- away with an idea to get him out of the mess. Ignác carried out miracles in the lightning and got Vincenc to sign a letter of indemnity in blood to Kucharyzor to get him out of the helpless situation. The Kucharyzor, a piece of equipment to prepare devilishly good food that Vincenc had to pay for with his own soul was subsequently able to feed his large family without any problem at all”. So read the first sentences from Anežka’s diary. “Pověst vývařovny” which transformed Vincenc from greengrocerdom, spread out into areas faraway. The food at Bulin’s was the tastiest in the region and at low prices too.

The only feature which put a dampner on the otherwise fantas- tic impression all of this made on customers was that, from birth, all members of the Bulin family started growing horns (this phenomenon was later referred to in medical science as ‘Bulinia’). At first, guests had troublecoming to terms with it but to the credit of a new speciality, called the “Kucharovo ucho” (the Kucharova ear), they soon got used to it. The clan grew stronger and the generations of Bulins took their turns at running the restaurant.

In 1901 Josef Bulin, his wife, Jaroslava and their five children, took over ownership of the restaurant. Five years later on his death bed, Josef made a decision that would affect the destiny of his lineage by offering Karel Tuzar, an admirer of his daughter Vlasta, the opportunity to become the boss of his restaurant to the dismay of his son, Maximilian nicknamed Kopyto. He subsequently spent years trying to win back the restaurant, however his efforts were in vain. Sometime after, he set up his own restaurant “U Maxe” on Wenceslas Square. Karel Tuzar was later to become famous for inventing the habit of tipping. He had three children, among them Anežka Tuza- rova. Due to a tragic circumstance leading to the loss of her brother Miroslav and his wife Anna in 1942, Anežka was made owner of the restaurant. During this war-torn period, the restaurant was converted into a shelter for all those in need. Everyone took away a bite to eat from the tommy. She also acquired her second name, Dobrotivá during this period. With the assistance of her two children, Boženka and Josef as well as the cursed Kucharyzor, Anežka was able to make life easier to many people during this period. But once again the devil Ignác Kuchara started nervously making appearances around them in his rather becoming uniform and he couldn’t fathom out all the good-doing going on around him.

Soon after the Kucharyzor suddenly ceased to exist,
a German artillery bomb went astray. Anežka spent the rest of her admirable life as a nun in a diocese in Lourdes – only she needed a slightly higher bonnet than the others. In the years that followed the former restaurant U Bulínů located on the corner of Francouzska and Budečska streets moved from a barber’s shop, a police station to a warehouse for cereals. In 1973 RAJ set up a buffet hear which, thanks to its fantastic waiter, Zděnek Šafář, was well sought after restaurant in Prague. To delve deeper into discussions about this, however, wouldn’t be so important to our story. What was important was the decision made to explore the long lost past held here and the attempt to renovate it according to all accessible evidence of Kurcharyzor and the surroundings in which miracles were made in his boilers, pans and glasses.